Once again, it’s time to stop and write a synopsis of events over the past year regarding the 3 (now 4) Alaska PVIL subsidiaries. As you might imagine, much has happened, yet it’s often difficult to know where to start, what’s worth mentioning and what people might be interested in. To those of us who deal with the details on a day-to-day basis, it’s a blur of activity with a general focus on what’s next; not what’s behind us. Looking back on the past year, not much has changed from prior years aside from the individual projects we happen to be working on.
Among the changes worth mentioning is the creation of a new business entity (Paug-Vik Contractors) that we hope to get certified into the 8(a) program later this year. While work procured through the 8(a) program has not represented a very large percentage of our overall program, it has been a consistent and profitable percentage of that program. With PVS graduating from the program in early 2016, we elected to create a new start-up in hopes of retaining the option for new work through the 8 (a) program. The new entity will be primarily a construction company that also does incidental environmental work. In terms of milestones, this new entity is bidding its first project next week; a 5 unit housing development with units in Copper Center and Chitna.
As many of you know, we changed office locations in Anchorage. While our prior location worked well for us in terms of client access, parking etc., yearly cost escalations were making it increasingly… Click here to continue reading!

After completing upgrades to the College in Dillingham, PDC received a change order late last fall, from the University of Alaska Fairbanks to do further upgrades on the roof of their Dillingham Campus. This include removing the existing metal roofing, installing rigid insulation, 2×4 sleepers, new 5/8’s plywood & ice & water shield, cutting new vents in the eaves and replacing the metal roofing, this was completed this summer. 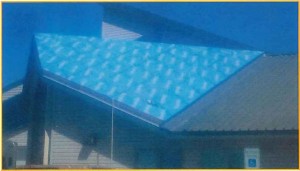 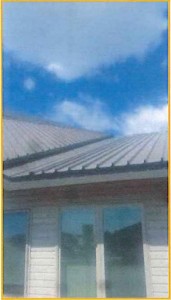 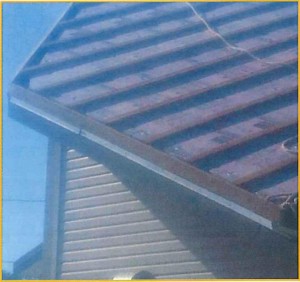 Paug-Vik Development was the successful proposer to an RFP for IDIQ work at the new NSHC Nome hospital, Contract work began in October of 2012 and continues through the present. Since last Newsletter PDC has completed the following projects for Norton Sound Health Corporation (NSHC) under our IDIQ Contract. Multiple Scopes of work on RFPs for the New Nome Hospital. The electrical upgrade on the NSHC Old Hospital and the local Community Health Services building. The Complete renovation of the Shishmaref Clinic Renovation The interior and exterior renovations of the Wales Clinic Renovations Sitework for a new Staff Housing Tri-plex at St. Michaels Alaska was completed late 2014. We are in the process of proposing on upgrades/renovations to the NSHC Hostel in Nome. Work will consist of new exterior ramps and stairs, foundation leveling and stabilization, patching and painting of all interior finish surfaces.

Through our NSHC IDIQ contract, PDC was awarded work to complete the interior and exterior renovations of the Shishmaref Clinic. Project consists of raising the Clinic 18″, demolishing existing foundation and install the new foundation walls to create a crawlspace under the clinic, new siding, metal roofing and soffits, new interior finishes and complete renovations of mechanical and electrical systems. 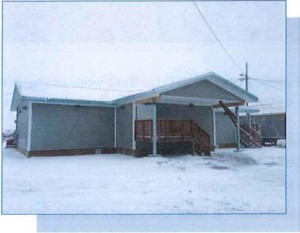 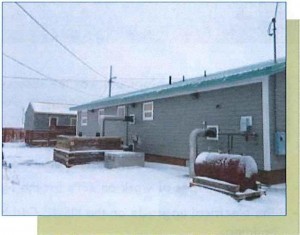 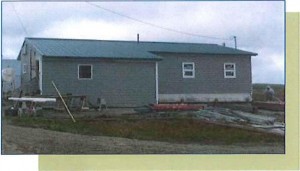 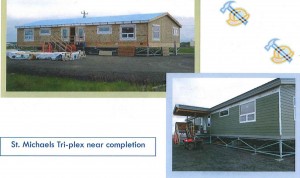 41 monitoring wells, 12 surface water locations, 5 sediment locations, and five residential wells. Thirty soil samples were also collected from several areas in Zone 7 where drums were previously removed. This was the second year of a five year contract awarded in 2014. 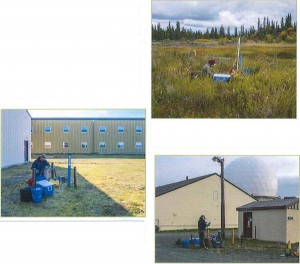 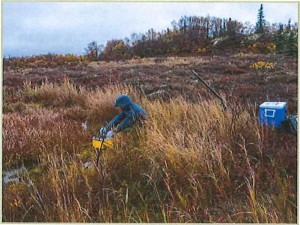 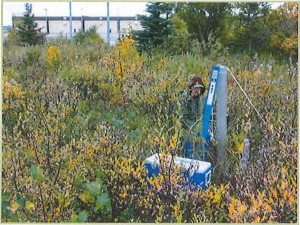 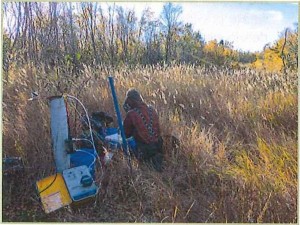 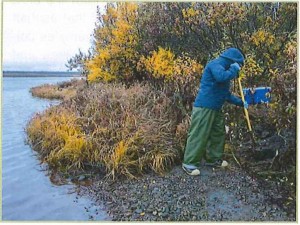 Collecting sediment samples in Zone 4 near the Naknek River.

The contract that this work is part of provided for excavation of up to 2,700 yd3 of POL-contaminated soil. The contract also provided the removal of up to 90 drums.

Soil confirmation samples were collected from the final excavations and were analyzed for previously identified contaminants. All samples were below cleanup levels and the excavations were backfilled with uncontaminated soil.

One new land farm was constructed to receive the POL-contaminated soil generated from this project. The land farm was sampled in July, 2015. 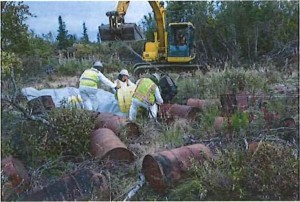 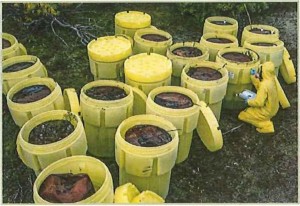 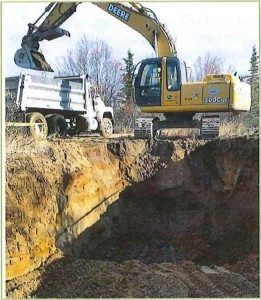 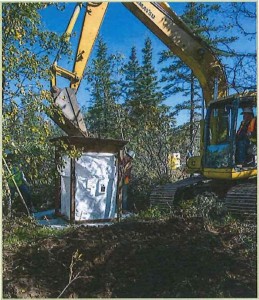 Trichloroethylene (TCE) contaminated soil being excavated and placed in supersacks for offsite disposal. 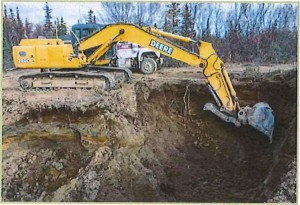 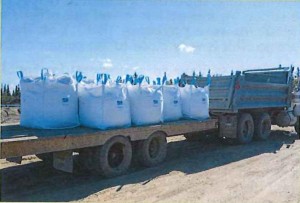 Supersacks with TCE-contaminated soil being transported to the dock for offsite disposal by barge. 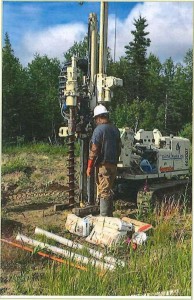 A new water monitoring well being installed at Fire Training Area No. 4.

expensive. In addition, there was no option for on-site warehouse space and this necessitated the rental of a separate warehouse across town for our incoming/outgoing tools and supplies. The space we moved into meets our office/warehouse needs an at a cost that’s less than half of what we were paying at 1600 A St. The new office address is 6250 Tuttle PI, Suite 5, Anchorage. This is very close to the corner of Dowling Rd and Lake Otis Parkway.

Our audited financial statements for Fiscal Year Ending Mar 31, 2015 indicate that PDC and PVS operated profitably. The current agreement between PVIL and PDC/PVS stipulates that 15% of pre-tax profits shall be paid to the Parent Corp as a dividend with another 15% to be paid into the shareholder trust account. For those keeping track, 30% of pre-tax profits are paid to PVIL in this way, another 40% is paid out as Federal/State taxes and the remaining amount is largely retained by PDC/PVS as operating capital. Additionally, PDC and PVS have made dividend payments to PVIL which were in excess of the 30% when retained operating capital was greater than our needs. The total amount paid to PVIL including both the Parent Corp dividend and the Shareholder Trust deposit for Fiscal Year 2015 operations was $256,600.20.
In terms of our overall financial picture, not much has changed. Our cash positions are strong enough to satisfy our bonding company and meet our operational needs. We continue to operate without any debt. Our bills are always paid in a timely manner and perhaps most importantly, our decision-making is not driven by cash flow constraints.

I’ve always emphasized that uncertainty and cyclicality are inherent to the nature of our industry. In some years, our public sector clients seem flush with money to spend on projects while in others, they have very little or none. Competition grows and withers with the cycles. Initially, during contractions, there is a desperate attempt by contractors to hang on and outlast the downturn. Risk taking goes to extremes and as a result, companies default on their projects and obligations or simply turn off the lights. I believe we are at this point in a cycle now. I’ve noted that on bid day(s), competition is less intense than it has been in the recent past; both in terms of the number of bidders and bid spreads while at the same time, there are even fewer bidding opportunities. I’m hopeful that as the cycle progresses and work becomes less scarce, we’ll be in a strong position to meet the needs of our clients in an environment characterized by few qualified, solvent contractors.

Our goal has always been operate at a level that allows us to handle as much as 15 million dollars per year of gross volume while also being able to survive on a fraction of that amount during lean times. We focus on the bottom line (profit) rather than the top. line (gross revenue). We often find that we can make more money by being selective and performing a smaller volume of work very efficiently rather than a larger volume marginally. While our approach may not seem bold or ambitious enough during the high points of the cycles, it does seem to work well across full cycles and over longer periods of time.

PAUG-VIK. DEVELOPMENT
CORPORATION
BOARD OF DIRECTORS