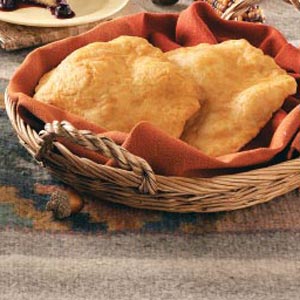 Alaskan fry bread is different than fry bread down south. Instead of being made with baking powder, water, flour and salt, it is made with yeast, flour, dry milk, water, salt, and usually some sort of sweetener. Just like a yeast bread recipe.
Traditionally, I’ve seen it served hot with a drizzle of honey, or with jam made from local berries.

Sprinkle yeast in the milk, let it set for a couple minutes to make sure the yeast is alive. If the milk gets a bit foamy, it’s alive.
Stir sugar and salt into the milk, then add 2 cups of flour and stir it in.
Slowly add the rest of the flour, when you can’t stir, knead it in. You might need a handful of ;four, more or less.

Set in a greased bowl, cover and let rise for one hour.
After it rises, punch it down, and split the dough into 2, then each of those pieces in 2, then each of those pieces in 2. There should be 8 balls total. Roll the pieces into a ball shape and pat and pull them flat. Cut 3 or 4 lines through the dough and stretch it out slightly.
Set the pieces aside and heat up the oil.
Again, traditionally, Crisco is used because it keeps well, although some people like to use canola oil.
Put 3 inches of oil in a heavy big skillet. Heat it up.
When the oil is hot*, put in the dough, a couple pieces at a time. Fry until it’s golden on one side, flip over and fry the other side.
When it’s golden on both sides, pull out and set to drain on a couple paper towels.